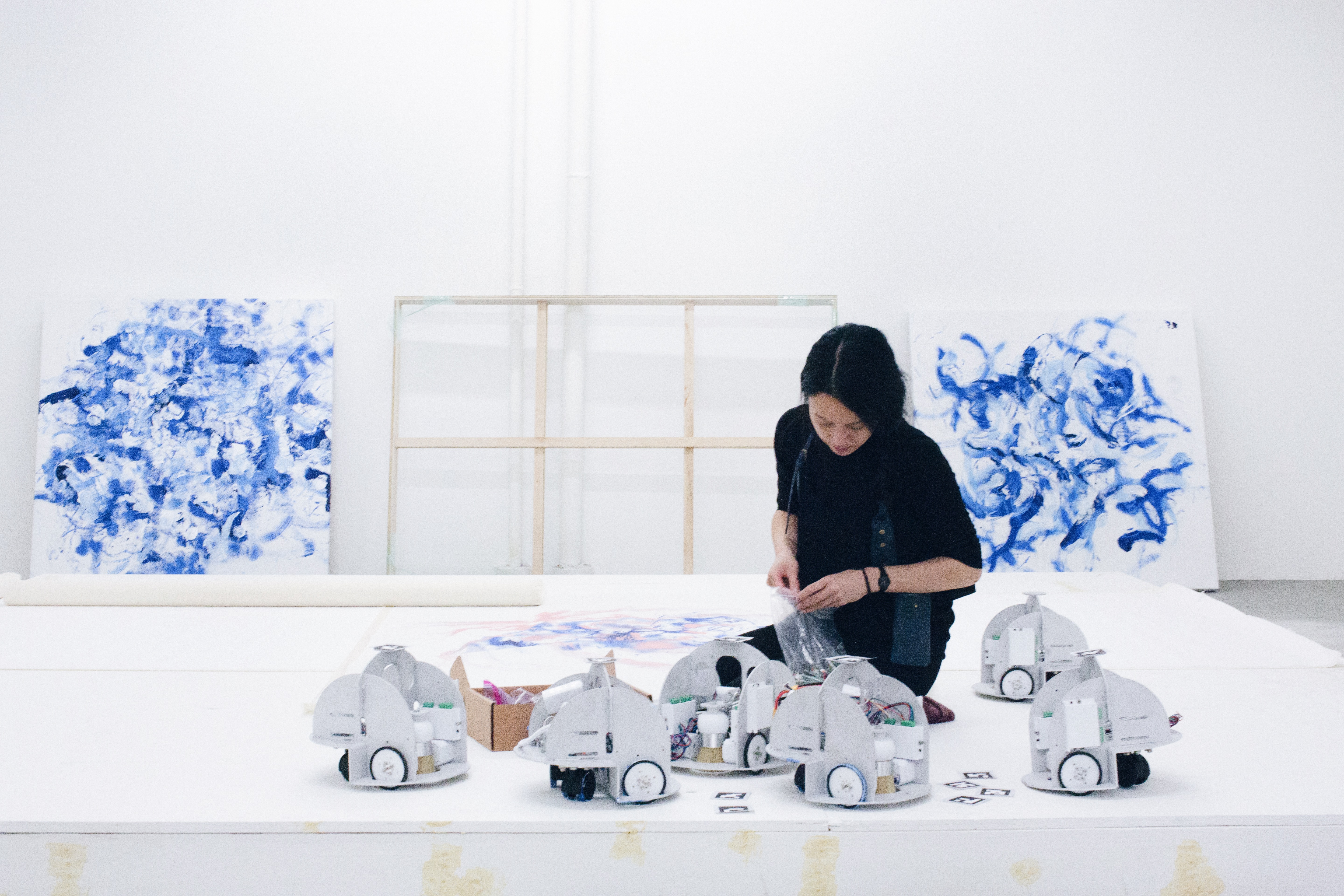 Inventing the Future of Art & Technology

Humans have an innate need to adapt and improve what surrounds them. The strong desire to create a better, more meaningful future can be seen through each culture’s artistic and technological developments. Though we as a species are programmed to aspire, grow, and create, the invention of something truly novel—whether it takes the shape of a groundbreaking artwork or a new technology that revolutionizes daily life—is rare. One, therefore, has to wonder: what are the circumstances that enable creativity and invention?

In the 1950s, Mervin Kelly became the president of Bell Labs, the New Jersey research facility, and set out to transform it into an “institute of creative technology,” an initiative that ultimately led to the invention of the laser, transistor, and solar cell, to name a few.1 He enacted social and architectural strategies to empower researchers, including a mandatory open-door policy that encouraged interactions between engineers, chemists, and mathematicians in a collaborative, interdisciplinary environment. Kelly also offered researchers the latitude to delve into self-directed inquiries for years at a time without a specific result in mind. He even designed some of the hallways at Bell Labs to be exceptionally long so that, in walking from one place to another, one would come across acquaintances, who might inspire fresh ideas or diversions. This synergistic, go-for-broke mindset became firmly embedded in the Bell Labs culture and laid the groundwork for radical breakthroughs and collaborations across disciplines between employees and others beyond the walls of Bell Labs.

Billy Klüver talking about E.A.T. and 9 Evenings to group of artists and engineers in Toronto. Artists requests to the engineers for their 9 Evenings performances are projected on the wall behind him. Photographer Unknown. All rights reserved. Courtesy of E.A.T. and Broadway 1602.A SENSE OF POSSIBILITY EXPANDED ON BOTH SIDES, AND THE ARTISTS GAVE KLÜVER WISH LISTS FOR NEWLY AVAILABLE OR NOT YET IMAGINED TECHNOLOGIES

Billy Klüver joined Bell Labs as an electrical engineer during Kelly’s tenure. He was encouraged to follow his passion for cinema and regularly attended film screenings and exhibitions in New York. Before long, Klüver met Robert Rauschenberg at the Museum of Modern Art, followed by John Cage, Merce Cunningham, Jasper Johns, Yvonne Rainer, and Andy Warhol. Over the course of their conversations, Klüver and the artists realized that their combined skills and resources could lead to the creation of works that merge artistic vision with cutting-edge research at Bell Labs. A sense of possibility expanded on both sides, and the artists gave Klüver wish lists for newly available or not yet imagined technologies. Klüver and the engineers at Bell Labs went into production mode, developing inventions such as modified TV sets and projectors that displayed abstract images in response to a musical tone, a Doppler sonar that translated movement into sound, and FM transmitters that relayed sounds from the human body to loudspeakers. The resulting artworks were not only ambitious but also the first of their kind, pushing both sets of collaborators to consider the creative possibilities and implications of emerging technologies. In October 1966, they were introduced to the public in a performance series, called 9 Evenings: Theatre and Engineering, at the 69th Regiment Armory. A few months later, Klüver and Rauschenberg, in collaboration with Fred Waldhauer and Robert Whitman, launched Experiments in Art and Technology (E.A.T.), a nonprofit organization established to support collaborations between artists and engineers.

Through these seminal collaborations and the decades of partnerships that followed, both artists and engineers experienced the advantages of multidisciplinary collaboration. While engineers tend to address challenges in a reductive, linear way, artists generally create artworks using a broader, more divergent approach that can also inspire tangible contributions to a technologist’s research. The engineer will often take a general or universal question and break it down into small components while an artist can observe something that’s seemingly simple and create a whole universe froman  it. Though different, the approaches are complementary because both parties are working in an abstract way toward new discoveries. The goal of ascertaining some new or deeper understanding of the world is a commonality between them.

Early in 2017, Bell Labs partnered with NEW INC, the art, technology, and design incubator founded by the New Museum, to reinstate the E.A.T. program with a year-long artist residency. The artists are granted traditional Bell Labs privileges: access to the company’s research, tools, resources, and fabrication studios as well as the freedom to explore countless avenues of research in order to identify relationships and areas of interest, open collaboration with researchers who are exploring everything from machine learning to multi-touch sensors, and a long-term scope to try, perhaps fail, learn, and try again.IN ORDER TO REACH OUR GREATEST POTENTIAL, IT’S IMPERATIVE THAT WE SUPPORT THOSE WHO ARE OPERATING AT THE EDGE OF POSSIBILITY

Two artists and one artistic collaboration—Sougwen Chung, Lisa Park, and the dance duo Hammerstep—are working with engineers to propel their practices forward. Chung began the residency after years of participating in a drawing collaboration with a robotic arm; through her discussions at Bell Labs, she is increasing the robot’s intelligence and multiplying it in order to study crowd behavior, influence, and empathy. Park is building upon her past work with brainwave sensors and heart-rate monitors to create a holographic installation that responds to human touch. Hammerstep is turning their futuristic dystopian written narrative into an immersive theater experience using interactive projections, motion- and biometric sensing, and low-latency locational technology. While these alternative and often poetic interpretations diverge from the engineer’s initial intentions, they have the ability to reveal aspects of technology—and our relationship to it—that wouldn’t have existed any other way.

On a daily basis, artists and engineers seek original ideas, processes, and devices for the benefit of humankind. Through close examination of past successes, we learn that the ability to take creative or intellectual risks without fear of failure, to participate in multidisciplinary collaborations, and to have freedom to develop seeds of ideas over a long period of time are essential for nurturing invention. Art and technology will define the future of humanity. In order to reach our greatest potential, it’s imperative that we support those who are operating at the edge of possibility.